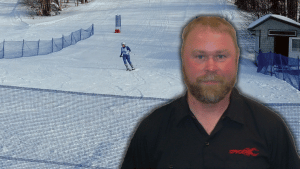 Big Rock Ski Area in Mars Hill was established in 1959 when selected as the highest eastern location to raise a flag in honor of our two newest states: Alaska and Hawaii. With that notoriety the owner of the land, Wendell Pierce, installed a Poma lift and operated Mars Hill Skiway of Aroostook for the next 39 years. In the 1980’s, the name was changed to Big Rock after a local naming contest. By 2013, Big Rock transitioned to a local community non-profit group and is now managed by Wendell Pierce’s grandson, Travis Kearney.

A ski area could simply not function without things that roll! Snowmaking, grooming and lift operations all require wheels and pulleys. In addition, mountain biking and tubing are new activities that require the ‘Wheel’. Because seasonal businesses have a short operating period, Big Rock is expanding its operating season to increase revenue by promoting various year round events. In 2014, the Mars Hill Mountain Challenge, a combined hiking & obstacle race, was created and has grown to over 200 challengers. Another popular event taking place in October is Rocktoberfest. This is a daylong event with mountain races, silent auction, live music, dinner and deals on ski passes. Corporate sponsorships and volunteers also help meet its budget challenges.

Big Rock has also implemented a Ski for Life program, which provides students in the fifth grade with transportation to the mountain, ski tickets and rental gear for a very low price. The ski area’s goal is to attract 17,000 – 21,000 skiers, snowboarders and tubers by the end of the 2017 season. Travis and his staff are predominantly targeting the 12 to 30 age demographic. Travis runs a Facebook page and is now incorporating a Big Rock Snapchat account to target that age group. This all adds up to smoother trails for Big Rock going forward.

Julie is an agent for personal and commercial insurance and branch manager for F. A. Peabody Insurance. She is a Certified Insurance Counselor.