It started in 2013 when Gregg Swallow, VP of Marketing, had an idea to promote our Facebook page. At the time, FAPCO’s page had about 1,000 likes. We decided that since people love pet photos and Christmas, a photo contest might increase our numbers.  The first contest was successful and generated 110 photo entries. The photo with the most likes earned $50 for its’ entrant and $50 for the shelter of their choice. The winner was a beautiful Maine coon cat named Bubbles from Knox and the Waldo County Humane Society. We decided to do it again the next year.

The shelters here in Maine do Facebook well, and we could not have made this contest work if they had not shared it with their faithful followers. Every year we remind them with a letter and email.

In 2016 we hit a record high of 750 entries and I was exhausted by Christmas. Gregg said, “Wow, what if we got 1,000?” I just laughed. No way we could handle that. In 2017 I learned a short cut in the process that I should have figured out long before, and we “only” got 600 or so entries. It was much more manageable, and we thought that maybe this thing was finally wearing out. I mean, how long could it really last?

In 2018 we received 1,036 entries, I managed to get it all done, and we got a shout-out from our local newspaper, The Houlton Pioneer Times. Our page surpassed 9,000 likes, far and above the following of any other insurance agency in Maine. Our photos reached over 60,000 people. We gave away over $1,800 to shelters. Facebook pet lovers proved us wrong and showed their love for the effort once again. We never would have predicted that it would get this big, but we are so thankful that it has!

In 2019 we will be ready to do it all over again and will again include our less popular but still very successful Patriotic Pet Photo Contest in July.

We also hope to sell some insurance along the way, and to continue to provide top-notch customer service. Our agents are friendly, professional, and knowledgeable. We save people money and help people through tough spots every day. If you’re reading this during business hours you’ve already noticed the new chat option on our website and maybe one of our agents has reached out to you. It’s easy to have a quick conversation and save some money. If it’s after hours, just fill out the contact form to the right and we’ll get back to you.

Thank you for your continued support! 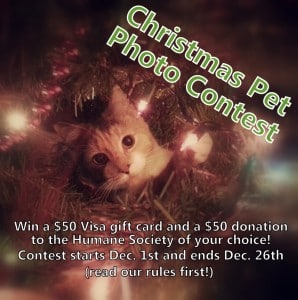 My cat, Merry, was featured in our first promo photo in 2013