In 1887, a devastating fire destroyed 21 buildings in Houlton, and already high fire insurance premiums skyrocketed. The town decided to build a water system to increase safety and reduce insurance costs. So in 1890, the Houlton Water Company was chartered. Over the next few years, sewer and electric departments were added, and in 1902, the town purchased all the stock in the company. Although other towns in Maine have power, water, and sewer departments, Houlton Water Company is the only separate utility corporation that is owned by a municipality.

On each of the white boards in the meeting areas of the Houlton Water Company, John Clark has written a key company mantra on top: Safety first. Quality second. Quantity third. He remembers being a young engineer at a Massachusetts power company and accompanying his manager to the home of a coworker who was killed on the job to inform the widow of her loss. He determined that he never wanted to do such a thing again and has made safety the top priority for himself and everyone who works with him. Staff are trained rigorously in safety through both inhouse training and training by outside specialists. Because of these efforts, the Houlton Water Company has won the prestigious SHAPE (Safety and Health Award for Public Employers) award from the Maine Department of Labor every year since 2012.

The Houlton Water Company boasts electric rates that are 35 percent lower than the Maine average. John and Greg attribute these low costs to several different factors. Because the company is tax exempt, it can borrow money at
significantly lower interest rates. The company is owned by the town, so there are essentially no stockholders and it answers only to customers. As a nonprofit organization, all savings are passed on to the customer.

In 1984, there were 33 full-time employees. Since then, supervisors and employees have stepped up to take on more responsibility. Through cross-training within their respective departments, on-the-job training, and professional development, the workforce now numbers 21 yet still provides the same reliable service at an affordable price. These efforts increase efficiency and job satisfaction, which is evidenced by the very low turnover among employees.

In addition to these factors, the management is always looking for ways to reduce overhead costs. It cites several key turning points in the last 30 years that have had a significant impact on its bottom line. In 1990, Houlton Water Company received shares in Maine Yankee, the former nuclear power plant, which reduced power costs by 10 percent per year. When Maine Yankee later closed its doors, Houlton Water Company was able to dispose of its shares and avoid litigation and environmental costs, which also saved customers money. In 1993, the company won a case with the Federal Energy Regulatory Commission to purchase electricity on the open market, the first municipally owned electric company in New England to do so. This effort saved electric customers $8 million from 1993 to 1999 and dropped electric rates by 40 percent.

All of this hard work and dedication has given the Houlton Water Company a reputation for fair prices and very reliable service. John credits much of this success to the board of directors which has always “written a blank check for safety.” He and Greg are thankful for the local business people who have served on the board over the years and who have always had the best interests of the company and the community at heart. The company serves the community in many different ways, including offering a customer appreciation day every summer and instituting an education day for local fifth graders to come and tour the facilities and learn about the business.

With this kind of innovation, longevity, and community service, the Houlton Water Company is prepared to bring power to the people for generations to come. 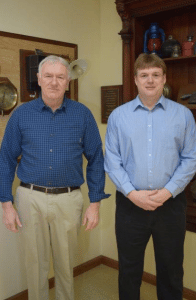 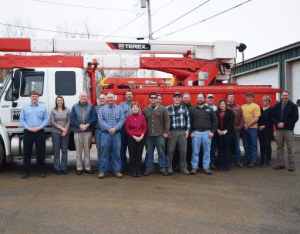