F.A. Peabody Company: A Portrait of Growth And Diversity

From our Fall 2017 Risk & Business Magazine

In keeping with the entrepreneurial spirit of the late 1880s, William C. Donnell, the first cashier of the First National Bank of Houlton, seized the opportunity afforded by the increased growth and prosperity in Houlton to start an insurance agency. On October 29, 1887, Mr. Donnell opened his insurance company in a small office conveniently located in the heart of the Houlton business and financial district. Very soon, the young company was granted a license to sell insurance by a major national firm: National Fire Insurance Company. This new business venture became the cornerstone of today’s F.A. Peabody Company.

At the turn of the century, a distinguished New Brunswick native, Frank Allen Peabody, moved to Houlton and entered the insurance industry. By 1906, Mr. Donnell and Mr. Peabody, foreseeing an optimistic future, merged their interests into the Donnell & Peabody Company. In this same year, the Houlton Trust Company completed a new building on the corner of Water Street, forming what was then known as “Market Square.” Donnell & Peabody Company flourished for the next twelve years on the second floor of this new building under the expert guidance of the two founders. Donnell retired in 1918 and Peabody became the sole owner.

In the early ’20s following Donnell’s departure, Peabody joined forces with another local agent, Alton E. Carter, and the combined entity was called the Peabody Carter Company. As additional staff was added, the partnership became incorporated in 1927. Lewis P. Bither became treasurer in 1928, and by 1931, he purchased all of Carter’s interests. Carter relinquished his name as part of the corporate title, and by 1933, the company became forever known as The F.A. Peabody Company. In that same year, Oscar P. Benn joined the agency, and in 1946, Fred Sylvester became part of the team and eventually the treasurer. Benn bought out the insurance interest of F.A. and Bither in 1947, become its president when F.A. retired in 1949. Frank sadly passed shortly after in 1950.

Frank A. Peabody’s illustrious career in the insurance business lasted over fifty years, during which he was active in both industry and civic affairs. A veteran of the Spanish-American Ware and commissioned for several years as a captain in the Maine National Guard of Company L, F.A. was both president of the Maine Association of Insurance Agents and chairman of the Houlton’s Board of Selectmen (for fourteen years) at the same time. He was a charter member and first president of the Houlton Rotary Club. He presided over the Houlton Trust Company until his death and was the former chairman of the Maine State Highway Commission. He was one of Houlton’s most prominent citizens up to the year of his death in 1950 at the age of 82. It is in honor of this highly respected community-minded gentleman that the F.A. Peabody Company holds its name.

The company continued to expand, and the need for more space to house Benn, Sylvester, and their four secretaries was urgent. So, after forty-six years on the second floor of the Houlton Trust Company, F.A. Peabody Company relocated to 1 Market Square.

Oscar Benn had a natural affinity for promoting the professional development of quality people. It was Oscar that created the first branch office by asking Vera and Bink Mitchell to sell insurance for FAPCO in Sherman. Vera took the lead and worked out of her house with an additional employee until FAPCO could afford an office location. FAPCO eventually built one in 1981, strategically situated by the intersection of I-95 and Route 11 where it remains to this day.

Oscar Benn served as president of the F.A. Peabody Company until his retirement in 1967. He was succeeded by his son-in-law, Robert (Bob) Anderson, who had joined the firm in 1961 and became FAPCO’s majority shareholder and president.

Under Bob’s leadership, the insurance agency grew steadily. In the mid-60s, FAPCO diversified from insurance by selling real estate led by Fred Sylvester who was still treasurer. Walter Burlock joined the firm, replaced Fred as treasurer, and continued management of the real estate division to its staffing peak of five full-time employees until his retirement in 1995. In 1969, the F.A. Peabody Company purchased the Johnston Plumbing and Heating building at 29 North Street and renovated it to meet the needs of the growing business. This facility has been enlarged and renovated twice since then. It now acts as the corporate headquarters, housing over twenty-seven people in more than 6,000 square feet of space.

Bob was not afraid to believe in people and find opportunities to grow through entrepreneurialism. In 1979, he hired FAPCO’s first dedicated life, health, and benefits producer to diversify the insurance offerings. In 1988, FAPCO purchased the Maher Travel Agency. Its name was changed to Travel Connections and served the Southern Aroostook area, employing four people. After fifteen years, travel services were increasingly being purchased by individuals directly online, therefore the division closed in 2004 in recognition of this trend. In 1991, FAPCO launched a third-party administration company serving the needs of the local funeral industry in Maine.

The “family business” tradition of F.A. Peabody was enhanced in July 1988 when Christopher Benn Anderson, son of Robert and Jeannette Benn Anderson and grandson of Oscar Benn, joined the company. Chris had been working for The Travelers, a large multi-line insurer. Shortly after his son joined FAPCO, Bob negotiated the purchase of FAPCO’s largest, longtime competitor, the George S. Gentle Agency. This acquisition marked the start of a twenty-year trend of mergers, acquisitions, and unique ventures; both in and outside of insurance.

Insurance expansion remained on the radar, with a total of ten mergers or acquisitions as of today. This growth resulted in the opening of seven additional offices for a current total of nine. In addition, FAPCO became a sales and servicing agency for credit unions and their members’ insurance needs and entered into a unique partnership with a professional employment leasing firm.

THE FUTURE IS NOW

With the growth of the company in full swing throughout the 90s, Christopher became involved in most aspects of running the operations including human resources and sales management. By 1998, Chris was elected president while Bob assumed the chief financial officer role and concentrated on corporate management and new development. By reorganizing its top leadership, FAPCO was ready to tackle the upcoming challenges of further business expansion.

By the late 1990s, it was apparent that the lack of telecommunication connectivity plagued northern Maine and those businesses needing to access high-speed networks. The World Wide Web was in strong demand, and for an insurance operation with disparate offices spanning 150 miles in the far reaches of rural Northern Maine, it was important to create an affordable computer network. At that time, Chris and FAPCO’s Vice President of Information Technology, Tim McAfee, studied the issue intensely. They turned the problem into a business opportunity, and in 2001, Pioneer Wireless Network was born, delivering high-speed Internet wirelessly throughout the territory.

From one room in the Houlton Trust Building to a 6,000 square foot main office with eight branch offices; from a staff of two to ninety two; from a small, mono-line agency to a multi-line insurance broker, 3rd party administration and Internet broadband services throughout Maine; from a handful of accounts to over 17,000 insurance customers, 4,000 internet subscribers and a statewide presence in 3rd party administration…the story of F.A. Peabody is a story of growth.

The F.A. Peabody Company history is not primarily one of facts and figures but of people! As Chairman of the Board Bob Anderson says, “The continued progressive success of the F.A. Peabody Company can be primarily attributed to the people who throughout the company’s history successfully met, and continue to meet, the challenges of the times through dedication, loyalty, pride in their work, and above all, commitment to providing excellent service.”

The history of F.A. Peabody is ongoing, and much is left to be written. 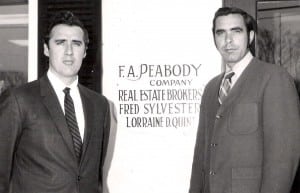