Rhonda Brophy opened the doors on a blustery March morning for our Risk & Business interview. She was ready to talk about the exciting history of Patten Lumbermen’s Museum and upcoming museum events. The museum is closed this time of year, but Rhonda is very busy in her practically full-time paid job as curator. She took this job 10 years ago after 25 years of operating hunting and fishing camps. She says running a museum is much like running a business. A curator for a museum is responsible for advertising, writing grants, fundraising, organizing events, public relations, maintaining and coordinating the museum displays, collections, activities and much more. The museum’s purpose is to tell the story of Patten, Maine’s rich history in the logging industry. A busy 2017 season is ready to begin!

Rooted in the Logging Industry

Patten residents Lore Rogers and Caleb Scribner founded the museum 1963. Rogers grew up in Patten, the son of a prominent logger, and spent most of his adult life in Washington, D.C. Upon retirement, he returned to Patten and collaborated with Scribner, a fellow Patten Academy graduate and long-time game warden, to begin preserving logging history.

In the early 1800s, Bangor, Maine, was the largest shipping port for lumber in the world. Just up the river in the heart of the Pine Tree State, Patten was full of trees ready for cutting. Teams of men would travel to Patten every November and spend the entire winter cutting wood. In the spring, they would float the logs down the river to Bangor. They cut the wood by hand, hauled it out of the woods by horses, and stored it until spring when the river was ready.

During the winter, they would live in simple wooden structures held together without nails. Cedar roofs were tied down with roots and bark strips. The cabins were built around a fire pit used for warmth and cooking, with a hole in the roof for smoke to escape. One section of the camp was dedicated to the sleeping area, with beds of balsam fir spread out on the floors. Up to 15 men would sleep here under one large blanket. A restored cabin is housed at the museum and available to tour in the summer.

In the early 1900s, the industrial world started changing the logging industry. Steam engines  meant that lumber could be hauled on trains. Diesel tractors allowed for logs to be hauled on trucks, so roads were soon built. Hauling lumber out of the woods became easier with the invention of the Lombard log hauler in 1901. Johnson Woodbury, a Patten resident, came up with the idea of a “cleat track.”  It was first used on the log hauler which could then haul multiple sleds of logs and replaced the work of about 50 horses. The cleat track is now common on bulldozers and military tanks. Patten Lumbermen’s Museum is proud to have an original, steam-powered, Lombard log hauler, one of only 83 ever built. There is also a gas-powered log hauler on display. Using these stories, Rhonda likes to tell local schoolchildren who come on tours not to be afraid of new ideas and that just because you are from a little town doesn’t mean you can’t do great things.

Also on display at the museum is a sawmill, a blacksmith shop complete with a local blacksmith working with the tools of the trade, a horse-powered drag saw, many old tools, equipment, artwork, and over one thousand photographs taken during the lumber camp days.

The 2017 season will kick off the Saturday before Memorial Day with the third Annual Fiddlers Fest. Fiddlers arrive from all over the state, along with a local crafters and food vendors. The festival also boasts a silent auction, and a Fiddlehead Cook-Off in which contestants are given a basket of ingredients and must use their creativity to make a fiddlehead dish. Each year brings two thousand visitors to the museum with many coming from Europe. Rhonda especially remembers a group of loggers from Sweden making sure to visit the museum on their trip to America because they had heard so much about it.

The highlight of each summer is the Annual Bean Hole Bean Day Celebration in conjunction with Patten Pioneer Days in August. Volunteers dig sixteen pits in the ground and build fires in them, letting them burn down to coals. Then, they place pots of beans in the holes, cover them in dirt, and cook them overnight. They serve dinner the next day with red hot dogs, coleslaw, boiled lumberman’s coffee, locally made gingerbreads, and biscuits cooked on-site in the open fire reflector oven. Families come for miles to eat around two hundred pounds of beans.

The logging industry is alive and well even today in Northern Maine. Large, high-tech harvesting equipment and dedicated logging roads are the new norm. Today’s logging leaders are great supporters of the Patten Lumbermen’s Museum, knowing that honoring the past helps build the future. 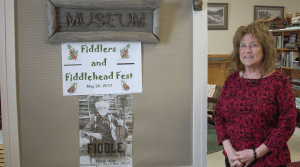