Rawcliffe’s Service Center: Offering More Than An Ounce Of Prevention 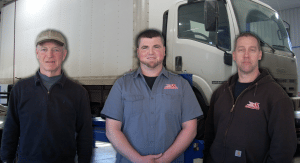 Jeff Rawcliffe is the third-generation owner of what has become Rawcliffe’s Service Center, and he also owns Hampden Auto in Hampden. The origins of Rawcliffe’s goes back to the early 20th century when Jeff’s grandmother would head into Pickering Square in Bangor at four o’clock in the morning to secure a spot from which to sell produce. His grandfather Jack, looking for more opportunity, immigrated to America from an English textile town; however, once Jeff’s grandparents got together, they created their own opportunities. By 1915, they had opened a general store on Kennebec Road in Hampden, specializing in Mobil products, tractor supplies and service, and produce sales. They remained in that location for over 10 years until the store was lost to a fire.

In 1928, they reopened with a Mobil garage on South Main Street in Hampden. The business primarily sold gas and Mobil products until the mid-1930s when they added light repairs and oil changes to their service offerings. Upon Jack’s retirement, the business was passed down to Jeff’s uncle, Carl Rawcliffe, who ran the business which by then included an oil delivery service. Jeff purchased the enterprise in 1976 when he was 23. Being mechanically inclined — Jeff performed auto repairs since he was 17 — Jeff added full-service car repair to the enterprise and by the 1980s, he was employing four service technicians. At the same time, he continued to grow the oil delivery business to 700 clients. In 1989, Jeff felt a second location with higher traffic was necessary for growth, so he purchased what is now Rawcliffe’s primary sales and service center at 651 Main Road North in Hampden. That has proven to be an excellent decision.

Rawcliffe’s has continued to grow and adjust to the changing vehicle service business and sales demands of the greater Bangor area. Jeff noticed a void left in the auto market when the long time Bangor area Volvo-Saab dealer closed its doors. This created a need for an enterprise to both sell and service foreign vehicles and resulted in the sale of Rawcliffe’s oil delivery business in 1995 so it could concentrate more in that area. Jeff opened a sales division, Hampden Auto, in 1990 that specialized in the sale of foreign-made autos such as BMW, Volvo, and Lexus. They now carry a large and varied inventory of late-model, foreign-made autos. In addition, the service department received extensive training which allows them to focus on foreign vehicle repairs. This niche has proven to be a great benefit to foreign vehicle owners that have come to respect Jeff’s straightforward sales approach and dependable and knowledgeable repair services, leading to continued growth in both divisions.

In the service arena, Jeff is extremely proud of his technicians; all are ASE-certified with several attaining ASE Master Tech status. In 2000, Rawcliffe’s was honored by being selected as #1 in Maine and in the Top 10 nationally in the Car Quest Tech-Net program. This honor speaks to both their emphasis on continuing education and the ongoing quality of their customer service. Moreover, Rawcliffe’s became an AAA-approved auto repair center in 2005.

The Service Center division remains the heart of the organization, and Jeff continues to invest in both heavy repair and diagnostic equipment. Jeff and his son, Rob, just completed a new addition to the service department and updates to the parts department. The emphasis on employing high-tech diagnostic equipment and continuing education for service technicians, all of whom are now equipped with iPads, has allowed Rawcliffe’s to fundamentally change the way vehicle repair is practiced. In the past, vehicles were brought in for repairs when car troubles occurred. Rawcliffe’s has intentionally changed that equation and employs preventative vehicle care, reviewing with customers when future maintenance will be necessary by establishing a maintenance plan. This allows preventative maintenance that both extends the life of the vehicle and avoids associated extra repair costs.

Today, Rawcliffe’s  has grown to 21 employees with two locations. It has earned a reputation for quality repair services which many towns and other commercial enterprises have come to depend on as a one-stop vehicle service and repair center for fleets. In many instances, Rawcliffe’s vehicle maintenance services have extended the life of commercial vehicles up to 100 percent due to preventive maintenance planning. Jeff and Rob have learned that in a changing world, a business needs to change with it to thrive and that customers are their most important asset.