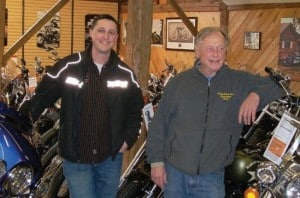 Owner, Wendell Sproul on the right and his son, Clark in the Central Maine Harley motorcycle showroom

There are thousands of Harley-Davidson dealerships in the U.S. Not many of them, however, have the rich and storied history of Central Maine Harley-Davidson. In terms of both family history and the memories of motorcycles, past and present, Central Maine Harley has a little bit of something for everyone.  In 1988, Wendell Sproul and his family established the company. At that time, Wendell was searching to provide a better life for both himself and his family. A welder for many years, he hung up his welding hat and gear and moved to Hermon, Maine to begin a new life.

The company started on a small scale and made do with the basics. It was initially established in an old barn. The strong lumber used in its creation and the classic post and beam structure from which it was made has stood the test of time, first being built in the late 1800s. Prior to Central Maine Harley, the building had housed Maine Motorcycle Sales, a company established in 1960 by Adrian Jones. Even then, the building doubled as a Harley-Davidson store and as a hay barn. Sales were slow, but this was partially due to the selectiveness that Adrian showed in his stock.

Once Wendell made the purchase, he and his family got to work with inventory and more. The walls and the exterior were reworked to to be more efficient, but the core structure was retained in order to maintain both the classic look of the building and the rich heritage. The second floor, which now serves as the motorcycle showroom, formerly housing parts, was updated with a refurbished I-beam which allowed the hoisting of motorcycles up and down from the new second floor showroom. Finally, a sales office was installed, along with a display window and overhead lights.

Since the founding of the company, Clark and Charlie, Wendell’s sons, have joined the company and work there every day. Cheryl Oliver, his daughter, does commercial and voice-over work. Jaylyn, Wendell’s wife, also works alongside Wendell daily at the dealership. Wendell is thankful for the support shown by the local community. Just a couple of years back, the company donated a new motorcycle to a retired Bangor police motorcycle officer. Giving back to the community that have given so much to them is one of the hallmarks of the Sproul family.

Central Maine Harley-Davidson has been in business for more than 25 years because of a combination of factors. They strive to provide high quality service and to create lifelong customers. From their initial start and until now, they have remained a part of the Harley-Davidson family while maintaining a local, independent flavor that is all their own. Wendell’s passion for the business and the strong family bonds that led to the creation of the company in 1988 have held true through the years.