Started in the 60s by Darrell McGuire, Darrell McGuire & Sons Inc. had humble beginnings. Beginning as a small, one truck operation, they have grown over the years to a large logging company. From the start, the company has remained steadfastly devoted to service, professionalism and family values. At its heart, family is the most important aspect of the company. They work to improve the land, leave the areas that they have worked in better than they found them, and maintain a high standard of service to the communities that they work in.

Darrell originally got his start as a woodsman, cutting down Christmas trees as a boy. His passion for the field continued throughout his life until he formed the company. He initially began as a simple wood hauling operation working with his brothers. It evolved into Darrell McGuire & Sons Inc., that performed timber harvesting, woods road building and hauling. In time, Darrell, Doug, Brent and Jon joined together to form the company. Doug’s children, Brad and Nick, have been with the company for many years and his third son, Bailey has recently joined. Darrell retired from the business that he started in 2000, and Doug, Brent and Jon continued working the business together until 2015 when Doug and Jon bought Brent’s interest in the company. They work to continue their family tradition.

The industry has gone through dramatic changes from what existed just a few years ago. With that in mind, the company has continued to evolve with the times, shifting its focus to the newest techniques and moving to the areas where they could make the most positive impact. They have begun to shift operations from logging to land improvement and management, using their tools and knowledge to improve the quality of the land that they work on and leave it better than they found it. Healthy land management is an essential part of environmental health as a whole.

One of their customers, Dan Delucca, spoke very highly of McGuire Logging. They have worked on 4 parcels of land for Dan, and he stated the following: “My experience with other loggers is that afterward, it looks like a bog. Not with Doug and his company, though. They left everything neat and tidy. They were very up front about pricing, left the woods nice enough to walk through, and even put down small roads to travel on.”

The company is, more and more, moving their operation away from “the way things used to be done”. The logging industry has been changing; mills are closing, wood demand is shifting, and the company itself is changing to meet that demand. Rather than focusing mainly on large logging jobs, they have shifted their focus to a method of selective cutting to improve smaller wood lots and working closely with the property owners. Land management is important. Additionally, they are expanding into tree service, clearing power lines, herbicide application and they are a licensed arborist, ready to care for the land.

Darrell McGuire & Sons started as a family business, and they continue to be a family business. Their success is due in part to the contributions of longtime professional employees, some of whom have been with the company for over 20 years. Though the industry and the methods have changed over time, their core values remain. 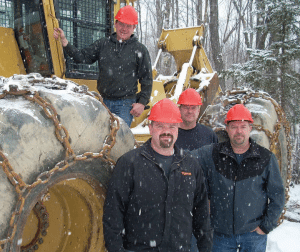 Scott Austin works in Property and Casualty Sales at F. A. Peabody and is the Agent for Darrell McGuire & Sons.