JDR Transport is a “county” born trucking company that has a history of family involvement that goes way,
way back. Formed out of necessity to transport their massive potato crop, the roots of JDR go very deep and wide. JDR Transport is only one part of a family enterprise that has blossomed over the past 100+ years into multiple interrelated corporations. McCrum Family Holdings, LLC is the main company of the family business that oversees eight LLC’s, each playing a part in their success. The divisions are made up of four farming operations: County Farms, LLC; Sunday River Farms, LLC; County Super Spuds, LLC; and County Grain Merchants, LLC; a land holding company, McCrum Land, LLC; an agricultural company, Northeast Applicators, LLC; a large potato
processing company, Penobscot McCrum, LLC; and the trucking company, JDR Transport, LLC.

Their history can be traced back 130 years and is as captivating as it is touching. It began in 1886, when Lemuel McCrum moved to Mars Hill and met Ada Sylvester. The family begins with 14 children and they start the family farming business. Darrell, one of their sons, continued the family farming on the West Ridge Road with his wife Nettie and their six children. The next generation kept the farm going: Dana and his wife Arlene, who moved to the Banks Farm on the North Road in Mars Hill. Three of the children in the fourth generation including Jay and Sue McCrum, David and Patti McCrum, Robert and Jill (McCrum) Lunney grew the family business into the size it is
today. Now the 5th generation, including: Wade (JDR), Darrell, Nicholas and John McCrum, along with Jason Willard (CFO) are continuing the family tradition.

JDR Transport was started to accommodate the ever growing need for trucks in the County Super Spuds operation. Starting with only 2 trucks in 1992, the company was born. As the farm grew, so did the fleet of trucks. County Super Spuds now grows over 3,500 acres of potatoes, and they have acquired a potato processing plant in Belfast, Maine:
Penobscot McCrum, LLC. With all the growth in the farm operation and the processing plant, so grew the trucking
operation. As of 2016, JDR has a fleet of 24 tractor trailers that haul products all over the east coast. They average over 2,000 loads of potatoes annually to the 3 “major” potato chip makers in New England. This is why they now have become known as the “Tater” Hauler.

JDR Transport has also become known as one of the best companies to work for in the Maine trucking industry. A firm commitment to good equipment and quality drivers has allowed JDR Transport to become very successful in both keeping costs down with very low loss ratio’s and being able to deliver all their loads in a timely manner. Wade gives a lot of the credit to his drivers, saying “we have been able to move product safely and timely because of our committed drivers and their families that support them”. It is clear that the values and work ethic he learned while working on the family farm has translated into a successful trucking business that the farm can depend on.  Concluding the interview, Wade was certain to give thanks to God for the blessings provided, and thanks to their many loyal customers that keep JDR Transport trucking along. 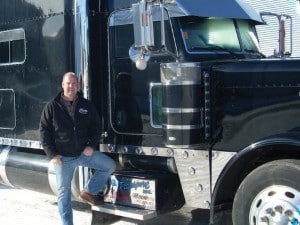