Patten, Maine, is a town of about one thousand people tucked into the scenic and rustic region of Mount Katahdin, Baxter State Park, and now the region’s newest recreational area, Katahdin Woods and Waters National Monument. Patten is at least a 40-minute drive from the larger towns of Houlton and Millinocket where more amenities are available. For the Patten resident, Ellis Family Market is a much-needed stop for everyday needs.

In 1983, Al Ellis and his wife, Lou, fulfilled a lifelong dream of becoming business owners and bought a local grocery store in Patten. In 1988, they built a new store next door to the old one and expanded their product selection. Their sons, Peter and Jon, after graduating college in 1989 and 1993, respectively, came home and joined the business, taking over ownership of the store in the late 1990s. In 2010, they undertook a huge renovation project and doubled the size of Ellis Family Market. In 2014, the Ellis brothers bought the former Lounsbury’s Shop ‘n’ Save in East Millinocket and now have plans to double the size of this new store next fall.

When asked how the grocery business has changed over the years, Peter remarks on the significant changes in the habits of grocery shoppers. In his early days, typically people shopped for groceries once a week or every other week — buying basic staples like flour, meat, and vegetables — since they mostly ate at home and did their own cooking. He even remembers selling flour by the pallet when it was on sale. Now, shoppers tend to visit the store every few days, buying smaller amounts of products and favoring packaged products that are easier to prepare quickly when they do eat at home. At one time, the cereal aisle was about 20 feet long and the store stocked nearly all of the cereal varieties produced. Now, the length of the cereal aisle has doubled, but they stock just a fraction of what’s available on the market because the consumption and variety of cereal has skyrocketed.

Peter also remembers laughing when they got their first gallon of water to sell in the store, certain that bottled water sales would never take off. Now Peter and Jon stock many different varieties and sell it every day. Specialty diets, such as gluten-free, have increased the demand for certain products that were unheard of a generation ago. Another big change is the use of social media for marketing. When a product is marked down for quick sale, a simple Facebook post will get the word out so quickly that the items will be sold out within a day. Concerning social media, the Ellis Family market utilizes its Facebook page well and has many positive reviews about the high quality of service at both stores.

The local community has changed over the years, experiencing a decline in population as more of its younger people are moving away. The Ellis Family Market adapts to these changes by paying close attention to the needs of the community and providing a wide variety of products in addition to groceries. As other stores in the area have closed over the years, the Ellis’ will add some popular “lost” products to their inventory to help satisfy the needs of their customers. Peter is hopeful that any new businesses that are opening in the area will bring a promising influx of people and jobs. Baxter State Park attracts many tourists in the summer, bringing a 50 percent increase in summer sales. Peter and Jon hope the addition of the Katahdin Woods and Waters National Monument will attract even more people to the area.

The Ellis family has weathered the test of time and the many changes in the grocery industry with grace and creativity, and they will continue to take on new challenges in our fast-changing world. 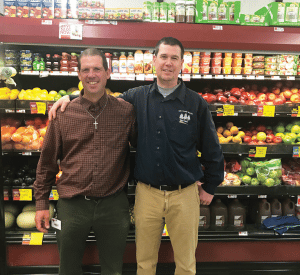