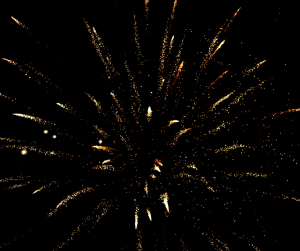 It seems that you can’t properly celebrate the 4th of July without fireworks.  I am lucky enough to live in a community that goes all-out on Independence Day, with arguably the best celebration in the State of Maine. So, our town takes fireworks safety very seriously. I’ve enjoyed the Houlton, Maine Agricultural Fair and fireworks at Community Park since I was a little girl.  A handful of times, due to budget constraints or the exhaustion caused by raising children, my husband and I decided to stay home and watch the fireworks from the back yard, since we have a pretty good view.  Each time, the evening ended with a promise to go back to the park the following year, because it’s just not the same at home.

Since the state made consumer fireworks legal in 2012, we’ve also enjoyed some impromptu fireworks shows by our neighbors.  We launched a few of our own on New Years’ Eve, and recently attended a party with fireworks at the lake.  The last event was a little bit scary.  One of the fireworks flipped over after it was lit, and shot directly into our 13 year old son’s leg.  He suffered a minor burn on his shin, and we all were grateful that there was not a more serious injury.  I had my typical thought after such an accident, “This would make a good insurance blog.”

The National Fire Protection Association reports the following statistics from 2011:

MMG Insurance, one of the insurance companies that we represent, released some helpful safety tips in its summer newsletter.

Celebrating Independence Day should never result in tragedy.  Take care, and have fun!