A Note of Thanks

Every once in a while, a satisfied customer will send a note of thanks to an employee, or to their supervisor, for a job well done. Those unsolicited accolades eventually move up the ladder to the president’s office. At that point, FAPCO makes a company-wide announcement that an employee earned a ‘Golden Paperclip’. Sometimes, the customer will even give a tangible gift to the employee. ‘The employees really enjoy being recognized by our customers for their good work and sometimes customers will send flowers or candy or other items of thanks besides a written note,’ exclaims Chelsea Henderson, F. A. Peabody’s human resource director.

Beginning in 2016, FAPCO took this award to a new level. ‘We liked the idea of celebrating employee appreciation and decided to formalize the award with a traveling trophy,’ Henderson explains. The trophy itself was weeks in the design and making. ‘We wanted it to be substantial, so we had a local volunteer bend a large piece of gold plated rod into the shape of a paperclip and mounted it on a heavy, specially ordered wooden base,’ says Henderson. Whenever an employee is recognized for their good work they will earn the right to hold the Golden Paperclip trophy in their office for at least one-week before it moves on to the next award recipient.

After time, FAPCO developed rules which also include co-worker awards. ‘Often, I will have an employee tell me about how another employee helped them out with a work related problem making their job easier,’ explains Henderson. “They will tell me ‘so and so’ deserves a GP because they helped me out! It is great that not only customers show their appreciation but also co-workers recognize when someone went the extra mile. This all helps build a sense of teamwork,’ explained Ms. Henderson.

According to Ms. Henderson, in 2015 FAPCO awarded 16 customer Golden Paperclip Awards. ‘We would be thrilled if we received as many GP’s in 2016 as we did in 2015 and we hope to have 12 co-worker Golden Paperclip Awards to add to the list’ exclaims Henderson. When a customer reaches out, the employee automatically earns the award. Employees nominated by their co-workers to receive the award will be reviewed monthly by management and one per month will be selected to receive the award. ‘In the end, we want to see our employees celebrated for their hard work, dedication and excellent customer service.’ 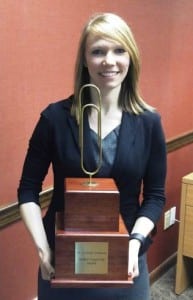