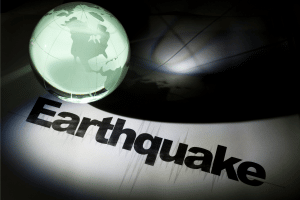 Unfortunately, your basic homeowners policy does not cover earthquake damage.

Earthquakes can literally shake up your life.  Studies suggest that earthquakes have the potential to produce significant damage in 42 of the 50 U.S. states.  So, most U.S. homeowners need to be prepared for the possibility of an earthquake. Unfortunately, your basic homeowners policy does not cover earthquake damage.

In a 20 year period between 1975 and 1995, earthquakes occurred in every state except Wisconsin, Iowa, North Dakota and Florida, per the USGS.  According to a poll taken in 2016 by the Insurance Information Institute, only 8 percent of U. S. homeowners have earthquake coverage on their home.  Even in California, just 11 percent of homeowners had earthquake coverage as of last year, according to the California Insurance Department.

Below are some facts to consider when purchasing earthquake insurance.

It’s important to ask yourself this question “Can I afford to skip this coverage and pay out of pocket for earthquake-related repair and replacement costs to my home and contents?”

Contact us today to find out about this coverage!