While springtime in other parts of the country is symbolized by flowers and green grass, springtime in Maine means mud and potholes.

Roadways that have been frozen for months start to thaw out, but the ground underneath remains frozen, causing water to wash out the top layers of soil under the asphalt. Normal road wear causes breaks in the pavement. 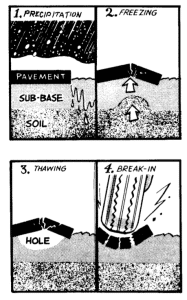 Road conditions like this caused damage to vehicles. A recent survey conducted by Trusted Choice Independent Insurance Agents and IIABA showed that from “2009 to 2014 half of car owners experienced damage to their vehicles as a result of potholes. The survey also found that 31% of car owners who reported pothole damage to their vehicles filed a claim with their insurance company, but a surprising 65% of respondents who needed repairs said they (or a third party) paid out of pocket for the vehicle to be fixed.”

Try to avoid pothole damage by driving more slowly and keeping an eye on traffic patterns and the condition of the road in front of you. If you do sustain damage, record the details just as you would with an accident, and consult your insurance agent.